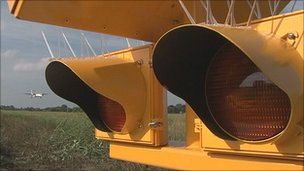 Systems Interface has featured on the BBC South Today TV news show in an article about the solar powered 'wig-wags' (runway guard-lights) that SIL supplied to BAA for installation at Southampton Airport.

Designed in coordination with JSF Technologies, a leader in solar LED traffic lighting systems for civil, government and international requirements, the Solar Series RGL is a rugged, industry proven 24 hour LED lighting solution. The Solar RGL is the newest addition to the Solar Series LED line that includes the Wind Cone, APAPI/PAPI and LED Airfield Signs.

The five units use solar panels to convert sunlight into electricity and ensure the lights operate 24 hours a day. Their batteries can store enough energy to permanently operate the lights for up to 120 days without any solar charging.

The lights have also been installed in areas of the airport where there is no access to power supplies, saving the £170,000 cost of laying cables. They were trialled during last winter as replacements for the conventional lighting systems

Mark Gibb, director of airside operations admitted: "It's a drop in the ocean, but nonetheless it is part of our overall commitment to, wherever possible, identify possibilities to reduce carbon emissions.
"This is one small but important example of using new, innovative technology."

The airport has a target of cutting electricity use by 2.5% throughout 2010.

Mr Gibb added the airport would look at replacing actual runway lights with solar powered models when they come for up for renewal.